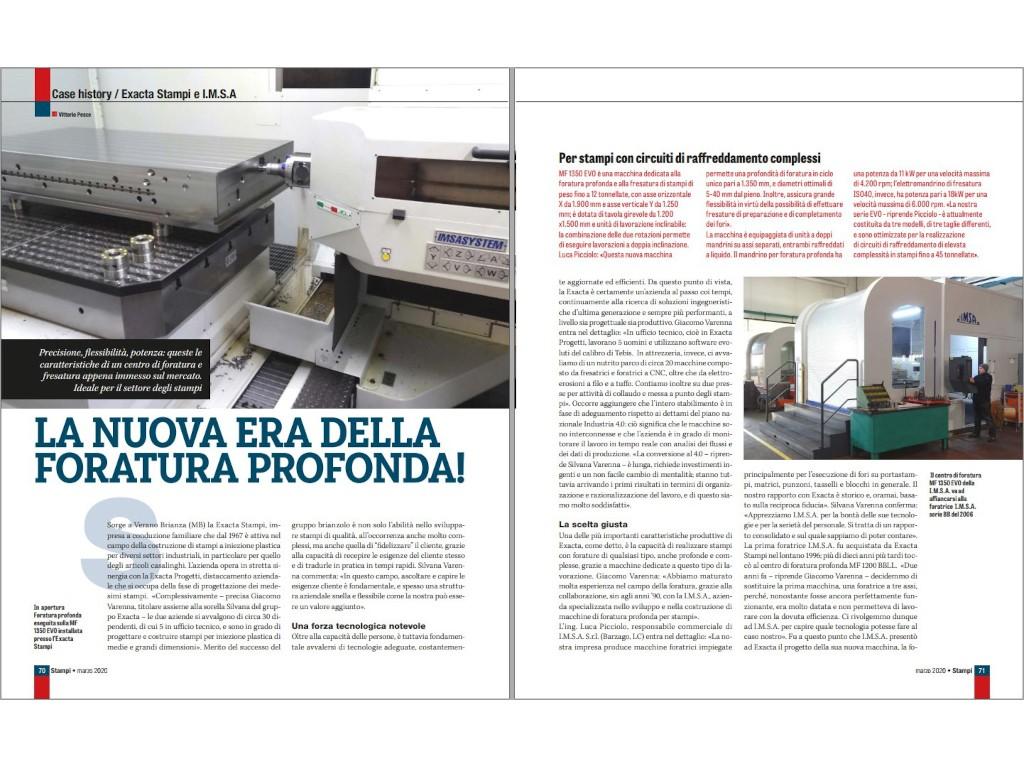 Precision, flexibility, power: these are the key features of the new drilling and milling centre just launched on the market. Ideal for the mould industry.

Situated in Verano Brianza (MB) Italy, Exacta Stampi is a family-run company that has been operating the field of plastic injection mould construction for various industrial sectors, particularly household goods, since 1967.

The company works closely with Exacta Progetti, an enterprise branch in charge of the mould design phase.

“Overall — explains Giacomo Varenna, who co-owns the Exacta group with his sister, Silvana — the two companies have about 30 employees, with 5 of them working in the technical department who are able to design and build medium and large plastic injection moulds”.

The Italian Brianza-based group owes its success not only to their capacity to develop high-quality moulds, which are often highly complex, but also to their ability to foster customer loyalty through understanding customer needs and swiftly reacting to them.

Silvana Varenna comments: “In this field, listening to customers and understanding their needs is crucial, so often a streamlined and flexible company structure like ours can be an added value.” 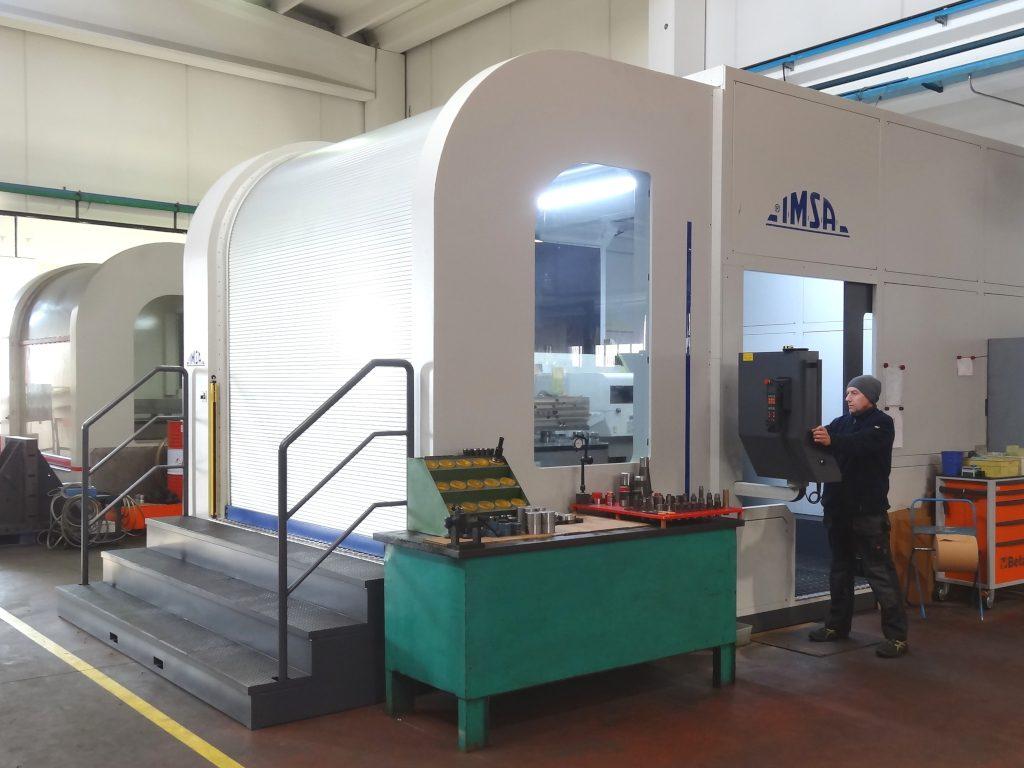 Besides having skilled employees, it is essential to avail of the appropriate technology, which is constantly getting updated and becoming more efficient.

From this perspective, Exacta is certainly a company that’s ahead of the curve, always on the lookout for the latest and highest-performing engineering solutions, in both design and production.

Giacomo Varenna gives further details: “In the technical department, which is under Exacta Progetti, there are 5 men working with advanced software such as Tebis. However, in the tooling department we have a large range of around 20 machines, including CNC milling and drilling machines and wire-cut and die-sink EDMs as well. We also have two presses for testing and finalising the moulds”.

It should be added that the entire facility is being adapted to the national Industry 4.0 plan, meaning the machines are interconnected so that the company is able to monitor work in real time and analyse production flows and data.

“Converting to 4.0 — continues Silvana Varenna — is a long process, requiring significant investment and a not-so-easy shift in thinking. That said, we’re beginning to see the first results in terms of organising and streamlining work, which we’re very satisfied with”. 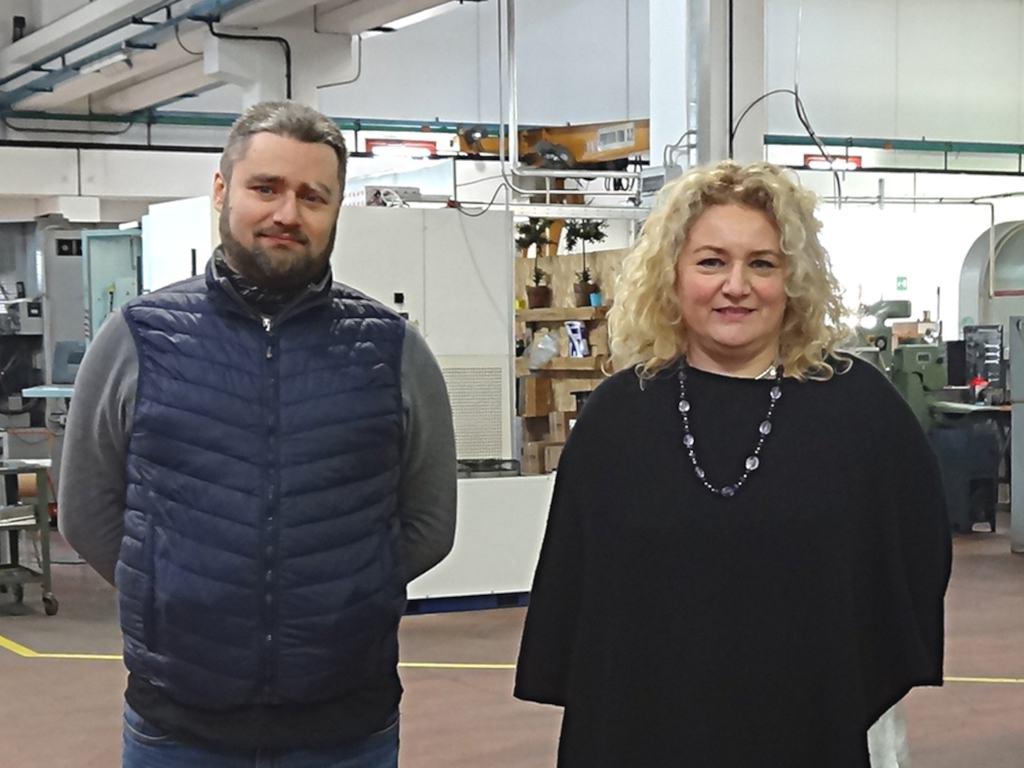 One of Exacta’s most significant production traits, as mentioned, is their capacity to create moulds with any drill type, even deep and complex ones, thanks to tools designed for this type of machining.

Giacomo Varenna: “We’ve gained a wealth of experience in the field of gundrilling because of our collaboration with I.M.S.A, going back to the ‘90s, specialised in developing and constructing deep drilling machines for moulds”.

Eng. Luca Picciolo, sales manager for I.M.S.A. S.r.l. (Barzago, LC) gives further details: “Our company manufactures gundrilling machines which are mainly used for drilling mould holders, printing plates, punches, block patterns and blocks in general. Our relationship with Exacta is long-standing and, at this point, it’s based on mutual trust”.

Silvana Varenna confirms: “We appreciate I.M.S.A.’s great technology and the professionalism of their staff. We share a well-established relationship that we know we can count on”.

The first I.M.S.A. deep drilling machine was purchased by Exacta Stampi back in 1996; more than ten years later it was the MF 1200 BBLL gundrilling centre’s turn.

“Two years ago — recalls Giacomo Varenna — we decided to replace our first machine, a three-axis gundrilling machine, because, although it was still in perfect working order, it was outdated and couldn’t allow us to work as efficiently as necessary. So we turned again to I.M.S.A. to find out which technology would be right for us”.

At this point I.M.S.A. presented Exacta with the designs for their new machine, the MF 1350 EVO deep drilling and milling machine, which was still in development at the time and wasn’t due for release on the market until Autumn 2019.

Silvana Varenna: “We decided to put our trust in our supplier, investing in this machine before it even came into being. We were sure about committing to the manufacturer who promised to produce a strongly innovative machine that could really enable us to jump forward again in quality drilling-wise”.

Luca Picciolo points out: “Exacta's decision to invest in the MF 1350 EVO before it was launched on the market was met with great excitement in IMSA: it was another milestone in the two companies' long-standing collaboration. The new MF 1350 EVO design has provided new opportunities for developing products that can satisfy the current market demands in an industry that requires increasingly high-performance and precise technological solutions”.

Thanks to the two companies’ effective cooperation, some operational improvements were implemented on the machine; for instance, following Exacta's suggestion, it was decided to install a cutting fluid cooling system with greater power, plus, some parameters were optimised for drilling high-alloy steels, notoriously difficult to process. Picciolo confirms: “Workshop testing is always fundamental when a new machine is being developed. Exacta Stampi is more than a customer, it’s a genuine technological partner”, underlines Luca Picciolo.

For moulds with complex cooling systems

MF 1350 EVO is a machine designed for deep drilling and milling moulds weighing up to 12 tonnes, with horizontal X axis of 1,900 mm and vertical Y axis of 1,250 mm; it is equipped with a 1,200 x 1,500 mm rotary table and a tilting headstock: combining the two rotations enables compound angle machining. Luca Picciolo: “This new machine allowsa drilling depth of 1,350 mm in a single cycle, and seamless diameters of 5-40 mm from solid material. Plus, it ensures a high degree of flexibility as it’s able to carry out milling for preparing and completing holes”. 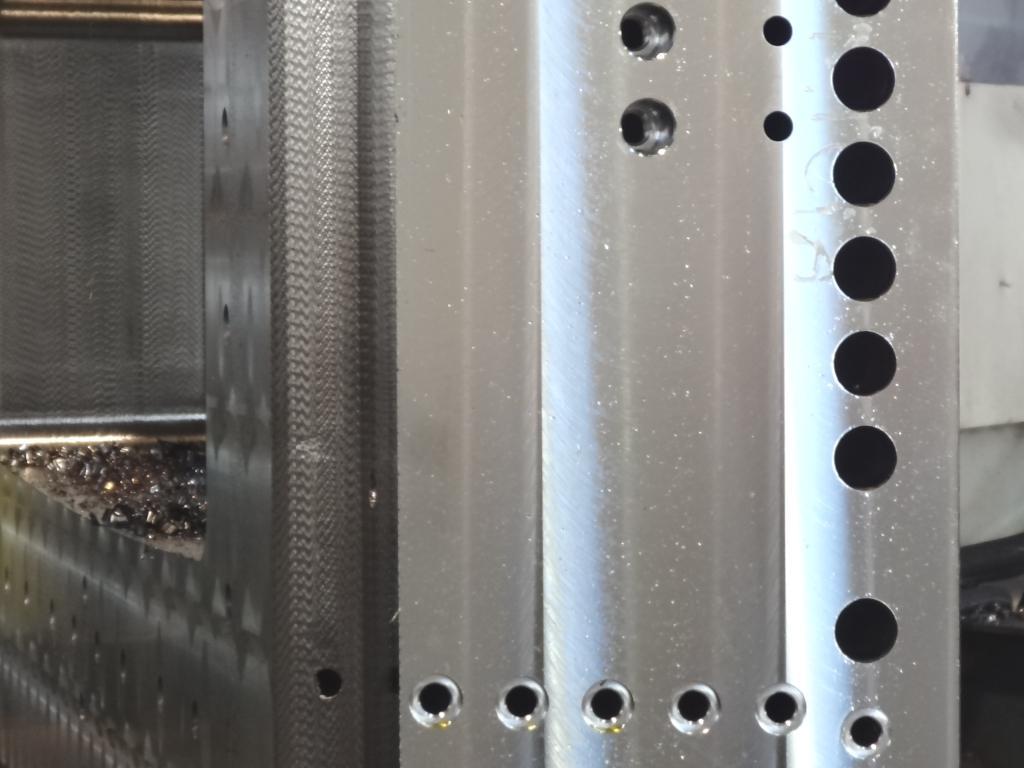 According to Luca Picciolo, “deep drilling remains an engineering process that adds high value, especially when it’s related to the world of moulds. For example, a certain type of drilling makes it possible to create highly evolved and refined cooling systems, leading to making moulds that are better cooled and, subsequently, more productive”.

In fact, moulds produced nowadays generally have more holes and are more complex than in the past. This means that drilling technology has needed to be updated over time.

Giacomo Varenna confirms: “We, as mould makers, have experienced these changes. Today we need much more precision than before, which is why we've invested in the new MF 1350 EVO drilling machine which, compared to the previous generation MF 1200 BBLL dual-spindle Gantry machine, offers greater rigidity, improved positioning accuracy and greater milling capacity”.

Luca Picciolo continues: “The MF 1350 EVO responds to new user needs. The previous BB series already had a Gantry structure, which provides around 16 times greater rigidity than machines with a column only supported at the base, and it already had spindles on a separate axis for deep drilling and milling, typical of I.M.S.A.

In our EVO series, the higher machining stress produced by the new spindles’ performance is distributed across the structure, which has several redesigned parts: next generation mechanical transmissions, optical position reading systems both for linear and rotary axes, liquid-cooled spindles, and other advanced technical solutions.

On the MF 1350 EVO drilling machine, the mould is clamped at the table centre and deep drilling and milling is carried out with a single origin, including compound angling operations”. 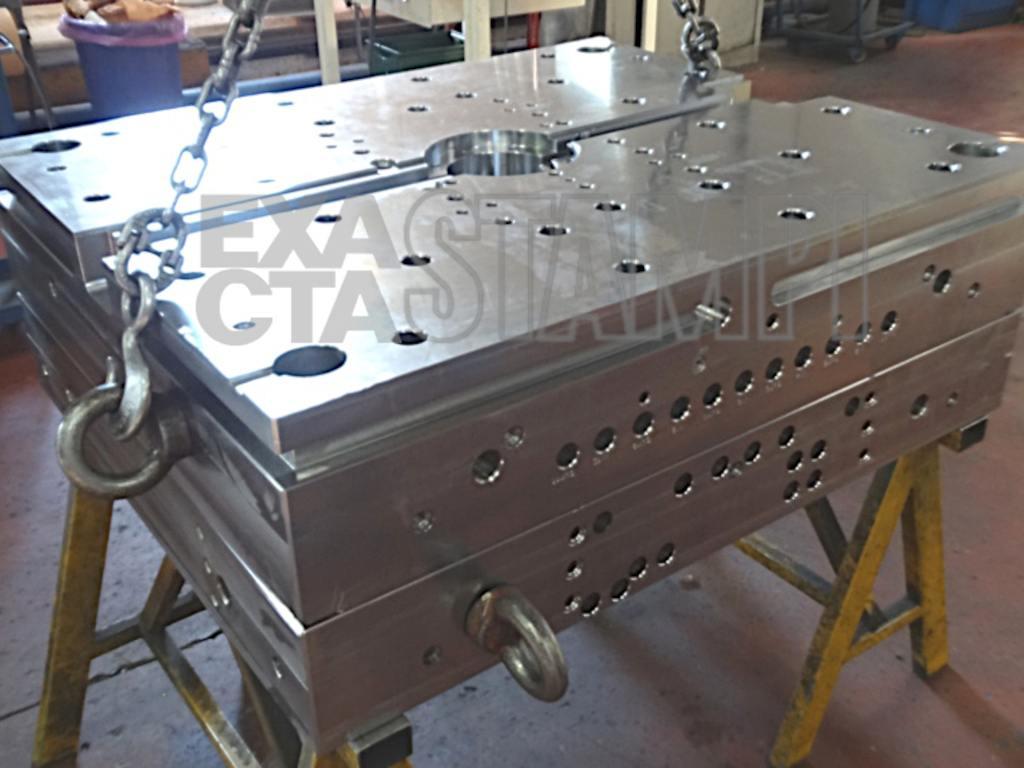 The new MF 1350 EVO was installed at the Verano Brianza facility last December.

Giacomo Varenna: “The machine looks definitely superior to the previous generation, in both speed and precision. It’s especially evident when we’re drilling larger holes, with 44 mm gun drills for example, where we’ve see a reduction in operation times of about 40%. Evidence of the machine’s solidity and rigidity is also demonstrated by its noiselessness: when it drills, the gun drill perforates the material as if it were butter”.

Silvana Varenna concludes: “We’re enormously satisfied with our purchase and with the results we’ve achieved with this new gun drilling machine after just a few months. It goes to show, when it comes to deep drilling, I.M.S.A. is top quality assurance!”

I.M.S.A. S.r.l. (Barzago, LC) is specialised in constructing deep drilling machines. The company, founded in 1988, currently has 44 employees and exports its machines to Italy, Europe and other Countries across the world such as the United States, Canada, Mexico, Russia, Brazil, etc., also using a local post-sales service in each Country. The MF 1350 EVO drilling centre purchased by Exacta Stampi wasn’t just the first one of its kind, it was also the 500th machine produced and sold by I.M.S.A. in its 30-year history. Luca Picciolo: “We are particularly pleased that this significant milestone was reached with Exacta Stampi, which is one of our most important customers”.

THIS ARTICLE IS ABOUT: 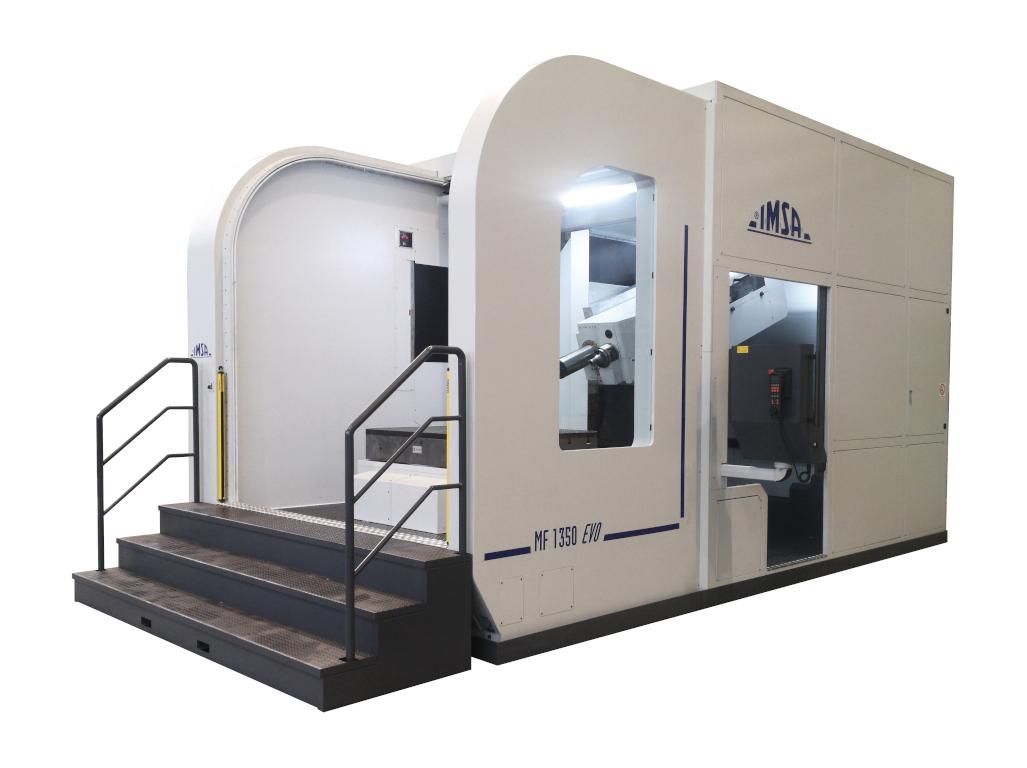 *NEW IN 2019* "GUNDRILLING AND MILLING IN SINERGY": EVO-Series Gun Drilling and Milling Center for molds that require multiple-axis waterlines. 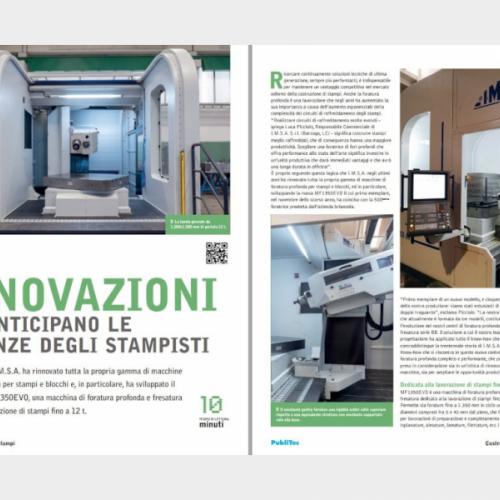 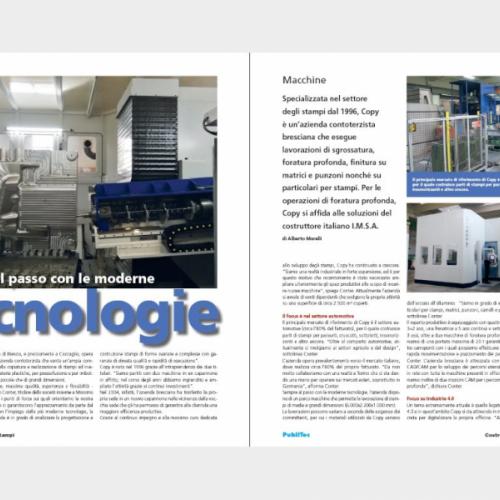 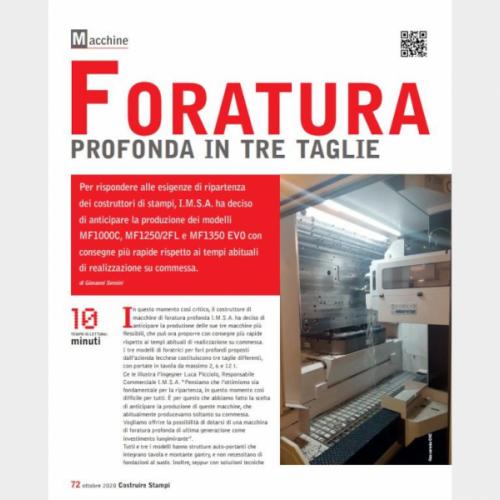